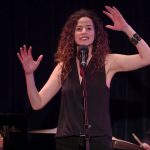 As BroadwayWorld previously reported, Mandy Gonzalez, who created the role of “Nina Rosario” in the Tony Award-winning musical IN THE HEIGHTS and can currently be seen in the hit TV shows “Madam Secretary” and “Quantico,” returns to Broadway on Tuesday, September 6 as the brilliant and beautiful Angelica Schuyler in the 11-time Tony Award-winning musical Hamilton.
+ Read more