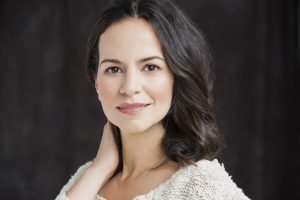 Mandy Gonzalez possesses one of the most powerful and versatile contemporary voices of our time. She is currently starring in the hit Broadway musical “Hamilton”. She is best known for her emotional portrayal of Nina Rosario in the Tony Award winning, Lin-Manuel Miranda Broadway musical “In the Heights”, a role she originally created Off Broadway at 37 Arts and which received a Drama Desk Award for Best Ensemble. She starred as Elphaba in the Broadway production of “Wicked”, blowing the roof off of New York’s Gershwin Theatre each night as she belted out signature song “Defying Gravity” and for which she was rewarded with a Broadway.com Award for Best Replacement. Other Broadway roles include Princess Amneris in the Elton John and Tim Rice musical “Aida” and the Broadway show “Lennon” where she portrayed multiple roles including that of Beatles’ icon John Lennon. Mandy made her Broadway debut in Jim Steinman’s “Dance of the Vampires” starring opposite Michael Crawford.

Mandy received an OBIE Award and overwhelming critical praise for her performance in the Off-Broadway production of “Eli’s Comin’”, directed by Diane Paulus and based on the music and lyrics of renowned singer-songwriter Laura Nyro.

Equally at home on the big and small screen, she has appeared in “Across the Universe” directed by Julie Taymor, “After” starring opposite Pablo Schreiber and “Man on a Ledge” with Sam Worthington. Most recently, Mandy had a recurring role on the ABC drama thriller “Quantico”. On Sunday evenings, television viewers can find her working at The White House on the CBS breakout hit “Madam Secretary”.

Mandy can be heard as the voice of Mei in Disney’s “Mulan 2” and on recordings of the original Broadway cast album of “In the Heights”, “Kerrigan-Lowdermilk Live” and “The Man Who Would Be King”.

Last year, Mandy debuted her solo concert Love, All Ways. She performs concerts in prestigious venues across the U.S. and around the world and has started working on her first solo album with plans for a release this fall (2017).

Mandy Gonzalez @_mandygonzalez
17 hours ago
Thrilled to be a guest vocalist with @CincySymphony next month!!! Get your tix!
https://t.co/HjmtGgr9az https://t.co/MuiKoSI0Hq
View on Twitter